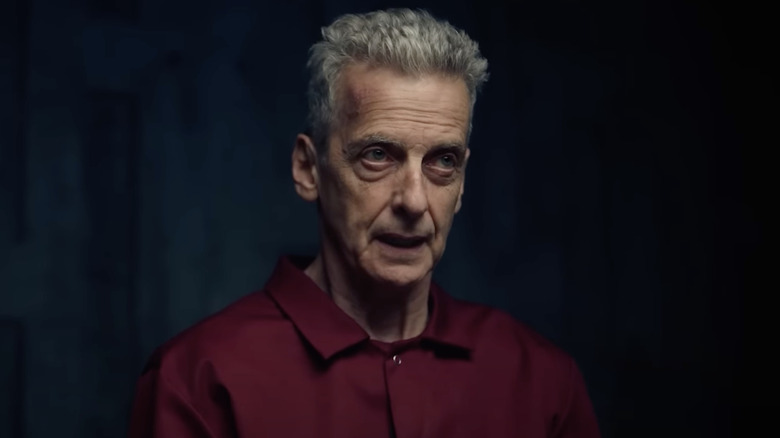 Are you ready for "a big ball of wibbly wobbly, time wimey stuff" that has very little to do with "Doctor Who," other than the fact that it happens to star Peter Capaldi, the Twelfth Doctor? If so, look no further than "The Devil's Hour," which perp-walks Capaldi in a red prison jumpsuit for all the world — or at least Prime Video viewers — to see. You don't have to be a subscriber to Prime Video to watch the trailer for "The Devil's Hour," but that's where this new six-episode series will be streaming.

"The Devil's Hour" sees Capaldi sitting across an interrogation room table from Jessica Raine ("Call the Midwife," "An Adventure in Space and Time"), who plays a woman named Lucy Chambers, with a link to one of several victims that Capaldi's character, Gideon, is suspected of killing. The series is created by Tom Moran, but there's one other "Doctor Who" connection with it in that Steven Moffat is behind it as an executive producer with Moran and Sue Vertue. Check out the trailer for "The Devil's Hour" below.

The trailer for "The Devil's Hour" has an appropriately televisual quality to it; it almost looks like a spin-off of the U.K. version of that Netflix anthology series, "Criminal," with a bit of timey wimey nonsense thrown in. I have to admit, I'm a little disappointed that Peter Capaldi appears to be playing a garden-variety time-traveling fortune teller and serial killer (or something) and not the actual devil. I feel like I was promised the devil, and all I got was clocks, wristwatches, and dramatic music ... but maybe the twist is that the devil is obsessed with time like Christopher Nolan. I'm just spitballing here (and probably doing it badly).

In the trailer above, you can also spot Alex Ferns, who played police commissioner Pete Savage in "The Batman" this year. Capaldi last appeared as the Thinker in "The Suicide Squad" and as the older Siegfried Sassoon in "Benediction," so he's comfortable juggling superhero blockbusters with British biopics, and it looks like "The Devil's Hour" might fall somewhere in-between as a slice of British genre fare. Here's the official synopsis for the series via Prime Video:

Peter Capaldi (Gideon) and Jessica Raine (Lucy) star in The Devil's Hour, a gripping psychological thriller where Lucy's nightmares draw her into a hunt for a serial killer in a world where nothing is as it seems. Watch The Devil's Hour ... coming October 28 to Prime Video.

Read this next: 20 Movies About Time Travel Ranked Worst To Best

The post The Devil's Hour Trailer: Peter Capaldi Is Ready to Time Travel Up Out of Serial Killer Jail appeared first on /Film.