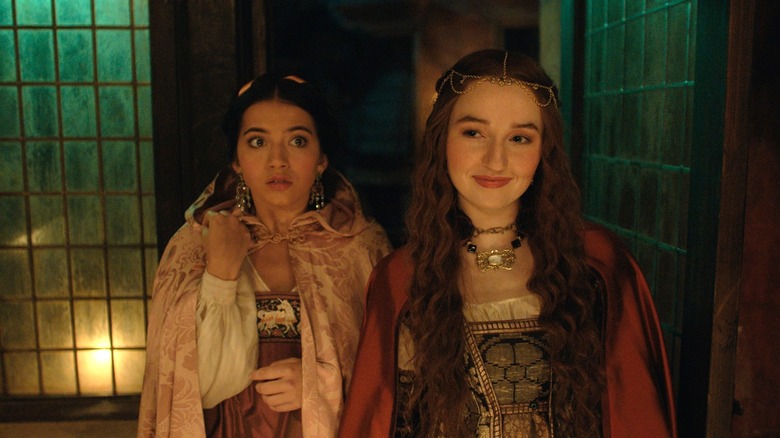 The tale of the young, star-crossed lovers known as "Romeo & Juliet" has been told and retold for centuries, but Hulu and 20th Century Studios have a whole new perspective to bring to the table. In a comedic twist on William Shakespeare's classic romantic tragedy, the tale of "Romeo & Juliet" is being retold through the lens of Rosaline, the gal Romeo was exclusively dating before he ran into Juliet at a party and completely turned his entire life (and family) upside down. Rosaline is devastated when she learns that her boyfriend has left her for someone new, and goes on a mission to break the two of them up and win back the man of her dreams.

"Rosaline" looks to be taking the anachronistic approach of Baz Luhrmann's "Romeo + Juliet" and inverting it, with classic period garb and set dressings injected with contemporary language and sensibilities. It's like how Brian Helgeland injected modern sensibilities into "A Knight's Tale" but with the teen girl movie twist, or how "10 Things I Hate About You" is just Shakespeare's "The Taming of the Shrew," but in this case with era-appropriate costuming.

High school English teachers have been screaming for years about how ridiculous it is that Romeo and Juliet risked it all after a whirlwind five-day relationship, but thanks to "Rosaline," we're finally going to see the story through the eyes of someone who can tell what a disaster this relationship is about to be ... even if her intentions for their breakup are in her own self-interest.

Look, Rosaline has every right to be cheesed off by the whole situation. Especially when looking at Shakespeare's text, Romeo never had the common decency to tell Rosaline what was going on! Hopefully, she doesn't have to endure any Elizabethan-era ghosting in this movie, but considering we see her hiding behind the bushes during the famous "balcony scene," there's a good chance Romeo left the poor girl on read. Or whatever they called that in the 1590s.

"Rosaline" was directed by Karen Maine ("Yes, God, Yes") from a screenplay by Scott Neustadter and Michael H. Weber, based on the novel "When You Were Mine" by Rebecca Serle. The film stars Kaitlyn Dever ("Booksmart," "Dopesick") in the titular role, Isabela Merced ("Dora and the Lost City of Gold," "Father of the Bride") as Juliet, Kyle Allen ("The In Between," "The Map of Tiny Perfect Things") as Romeo, Sean Teale ("Reign," "Incorporated") as Dario, Minnie Driver ("Grosse Pointe Blank," "The Phantom of the Opera") as the Nurse, and Bradley Whitford ("The Handmaid's Tale," "The West Wing") as Friar Laurence. The film was produced by Shawn Levy, Dan Cohen, and Dan Levine, with Kaitlyn Dever, Scott Neustadter, Michael H. Weber, Whitney Brown, Emily Morris, and Becca Edelman serving as executive producers.

"Rosaline" debuts exclusively on Hulu in the U.S., Star+ in Latin America, and Disney+ in other territories on October 14, 2022.

Read this next: The 15 Best '90s Comedies Ranked