By EIN Presswire: All Featured Press Releases on May 14, 2022 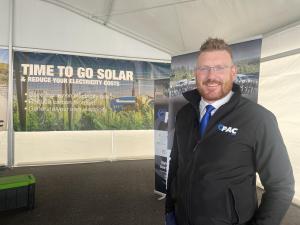 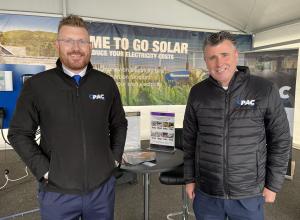 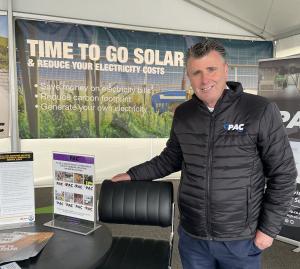 Domestic consumers, businesses and farmers are all looking at massive price increases. With no reduction in the foreseeable future there has to be a concerted effort to support renewable energy.”
— Darren Leslie, Business Development Director, PAC Group
BELFAST, COUNTY ANTRIM, NORTHERN IRELAND, May 14, 2022 /EINPresswire.com/ -- Northern Ireland’s leading engineering company, PAC Group, has called on newly elected MLAs to tackle the energy crisis by reducing barriers to renewable sources, such as solar.

PAC Group Business Development Director Darren Leslie was one of PAC Group’s team at the Balmoral Show this week, explaining to farmers and householders the benefits of solar panels, but he said that there is an urgent need for the new Assembly to address the renewable sector.

“We are facing one of the biggest energy problems for generations,” he said.

“Domestic consumers, businesses and farmers are all looking at massive price increases. With no reduction in the foreseeable future there has to be a concerted effort to support renewable energy.”

Mr Leslie explained that barriers included the lack of zero VAT, that applies in England, on solar panels.

“The UK government just over a month ago said anyone installing solar panels would benefit from zero VAT, but it’s not applicable to Northern Ireland. According to Westminster our Executive has to make that decision as we’re governed partly by the European Union rules” he said.

In addition, the PAC Group representative said that the lack of incentives for farmers and businesses prevents people from developing renewable energy sources.

“In Ireland grants are available but not here in Northern Ireland, and that is worrying for everyone in the agricultural sector especially,” explained Renewables Business Development Manager Brian Alexander of PAC Group.

He added: “Farms, businesses, outlets and stores want to establish their green credentials, for example supermarkets and fast food chains will be looking at their suppliers to show how green they are throughout the supply chain, without assistance many agricultural companies simply can’t embrace it.”

Although PAC Group were showcasing how they can support farmers with renewables at the Balmoral Show recently, they also want to explain to those attending the event the benefits of solar panels in the domestic sector.

“We can deliver a system that meets the needs of many people,” said Mr Alexander. “One of the biggest draws in your house when you go home at night is hot water. You need hot water to shower people, wash dishes, so whatever, hot water is a draw all year round.

“We have a system where you can generate the solar and any access solar that you don’t use it switches on a thing called a Solar iBoost or an Eddi and that will give you hot water onto your immersion. Basically, your immersion will top up but it’s using the power from the solar panels.

“A standard house will use about 4kW of electricity per year and a solar system in Northern Ireland will generate between, depending on where it is, 3.2-3.6 kW per year. In the current energy climate this would represent a considerable saving.”

Mr Leslie said the company’s attendance at the Balmoral Show is proving now is the time for action as soaring costs.

“Already we have seen a much larger number of enquiries than expected at the Balmoral Show. Many of these enquiries are from small domestic farms hoping to reduce the electricity consumption from the grid both from their home and farm buildings.

“Not just that, a large majority of enquiries have asked about funding sources and whether there is any help available to embrace solar as a renewable energy source.

“This entire sector needs to be addressed urgently by the new tranche of MLAs to support everyone in Northern Ireland as we look at having an energy crisis for some years ahead.”

PAC Group were offering domestic, commercial and agricultural packages at the Balmoral Show, all of which included a free, no obligation site analysis and estimate, along with free design and system yield calculation throughout the UK and Ireland. For those that require it, the team will also provide assistance with commercial NIE Networks applications.

For more information about how you can embrace solar energy go to pacgroup.co.uk or email info@pacgroup.co.uk